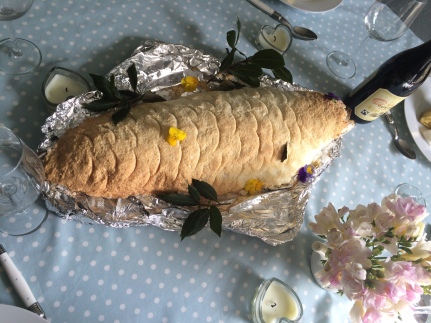 We had some family over for Easter Sunday lunch and had been pondering on what to make. Karl-Heinz and The Minx don’t eat meat and fish is always nice at Easter so we settled on that.

Going out with a vague idea of a large Turbot, as we would be seven in total, it was only after visiti

ng a few purveyors of fine fish and  finding a limited selection did it dawn on us how awful the weather conditions had been this week – with raging winds and storms at sea….so we had a bit of a re-think.

There is a ‘fish guy’ who comes in to London from Sussex each week with his catch and we saw a very fine, large wild bass which was frankly irresistable, stiffly fresh and glossy. We had hit upon the thought to bake the fine fish under a salt crust but we hadn’t cooked with this method before which added a little excitement. 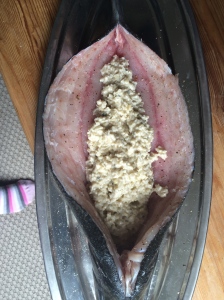 After consulting many guru’s we used the method below and I have to say – we were all very pleased with the outcome, the fish steamed beautifully inside it’s snow white duvet and was soft and moist. The filling of fennel was advised by our friend Cheffy Chefferson. The decision to ‘tunnel bone the fish, means you can stuff it evenly and when cooked you can slice through without the bones so although it takes a little time, it’s a great technique when serving fish whole at the table. This will definitely be one we will try again….I was going to edit out my foot from the picture but my socks looked nice, so I didn’t worry!

The Minx had made a inspired dessert of Rum and Raisin, Chocolate Cheesecake which was absolutely delicious and came from an Australian cookery book she came by… 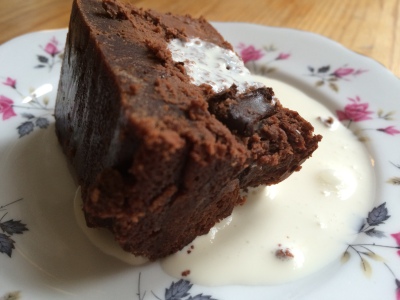 As Rocket prepped the crust (with a little help from his lovely assistant) I’m handing over to him for the rest of this post…but whilst he is chatting maybe you’d like to listen along to what I woke up humming yesterday and what was on my mind when we were getting ready for lunch…I don’t know why it was in my head – it’s funny how that happens isn’t it?

For the stuffing finely chop a couple of bulbs of fennel and sweat off in some butter. Add some pernod or white wine and reduce, then a good splash of double cream. Add some cornflour mixed with a little milk to thicken the mixture. Finally season to taste and add some picked thyme. Set aside to cool. 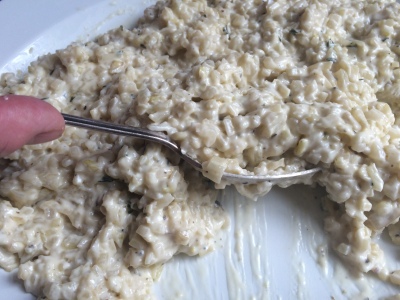 As Poppy mentioned earlier, I tunnel boned the fish. Without wishing to state the obvious your fish needs to be fully intact to do this so make sure your fishmonger doesn’t gut or scale the fish for you. So snip the fins and with your sharpest filleting knife run the blade along the spine and follow the bones down to the bottom taking care not to cut through the belly skin. Cut through the bone as close to the head and tailfin as possible and remove. Carefully remove the stomach contents and wash the fish thoroughly.

Check the flesh for any odd bones. Pat dry and fill with the cooled filling mixture. I ran a few stitches along the back to seal the stuffing in but remember to remove the thread once you’ve freed the fish from its salt oven.

So – the salt crust……… I whisked 4 egg whites into soft peaks and added a mix of rock salt and fine salt. I also added some picked thyme. 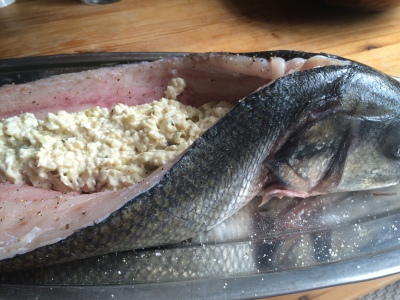 Now depending on the size of the beast you’re about to dress in its Sodium Chloride cloak you may have to tweak the quantities a little (and to be honest I’d underestimated just how much was needed for our bad boy!) But in essence you’re looking for a thick moist paste. Lay out a base of the salty mix, I then placed a few bay leaves on it followed by the Sea Bass. Cover with the remainder of the salt and pat the surface so it seals the fish. Some will say leave the head and tail exposed some say completely entomb. I went a little cheffy at Poppy’s behest and created scales with a spoon on the eggy saline overcoat.

It’s popped into oven on 190 degrees, Gas Mark 5 for 35 mins. One of the nice things about this method is that, when done, it will sit nicely on the top retaining it’s heat and moisture while you prepare yourselves for the grand undressing. When ready simply crack the salt crust and remove in large chunks, peel back the now leathery skin of the fish and tuck in to beautiful flesh.