My friend DJ Ozz passed a meaningful milestone the other day….so we kidnapped him, for our own entertainment.

The DJ had specified ’just a  breakfast in London’,  but our group of ‘know alls’  felt a collective  sense that ‘just out for breakfast’ was a little dull and this momentous occasion was worthy of a little more sparkle.

Over roast lamb with peppers and potatoes and in absence of dearest DJ Ozz,  we mulled the various options, and with passing time, a little surfing and some wine we covered various UK and global locations. A sense of realisation dawned, when wandering through the logistics of ‘housebreaking’ to find our victim’s passport that this could prove challenging. 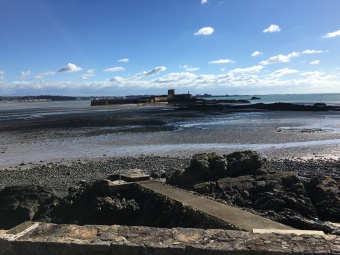 Not a fearful bunch… but we are pragmatic, so eventually we eschewed the housebreaking elements…..this would have to be a ‘one dayer’, free of passport and fear of packing the incorrect designer flipflops on the DJ’s behalf.  All this, yielded the plan to hop over the Jersey for the day.

Quick to secure an itinerary, the day would centre around lunch and following  sterling research from The Marmoset we settled on The Ocean Restaurant at the Atlantic Hotel. It sounded  like a trip to a 30’s Agatha Christie novel….

There it was then, that a slightly surprised and suspicious DJ was told to meet at Victoria Station ‘outside WH Smiths, at 6:45am’. (It’s fair to say that he expressed some surprise at the primitive hour).

Slightly subdued and a bit pastey from our early rise, I met Mr Vladimir von Beaverhausen and Vladi, The Marmoset and a baffled DJ before wandering toward the Gatwick express train platforms. As we neared, the DJ was heard to constantly mumble ‘I haven’t got my passport you know’…. and ‘where are we going?’

Once at the airport there was really no concealing the fact we were embarking on more than a breakfast trip, we joined up with Mata Hari and Stepney, adorned the DJ with a warning sign to all and sundry not to let him know his destination (airport staff were amused by the jape and very helpful in not spilling the beans) and we made it right to the gate before the plan was exposed.

The flight was brief, we were up and descending before we had chance to chug a couple of celebratory drinks. I recall an image following take-off, when the pilot immediately announced that we were due to land, Stepney, DJ and Mata Hari frantically stuffing breakfast pastries into their mouths and knocking back bubbly at the same time, with a certainty of indigestion to follow.

Arriving in Jersey, we hit cabs to St Brelades bay and found a little harbour side coffee shop where we could commence with doing nothing in particular, a favourite past time. 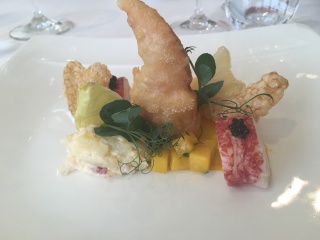 Lunch at the Ocean Restaurant at the Atlantic Hotel was masterful, attentively served and peppered with beautiful local produce. The fun in a group of 7 is that we tend to cover off most of the menu with our choices, so you get to vicariously enjoy many dishes. The food was beautifully presented and the service both slick and warm, I commend it to you as a very classy establishment. The chef Mark Jordan has been there since 2004.

I ordered the local lobster cooked in various ways and followed that with the Sole – it was meltingly delicious. I had order envy over the beef dish chosen by the Vlads which was served with ‘Jersey Royal Cappuccino’. The DJ chose duck…so what’s new? I’m surprised that boy doesn’t quack.

The hotel gardens roll gently down to the cliff edge, giving a clear view of the ocean from the dining room and although the cold wind blew, the sun shone on us too so for that day in March…. we were righteous.