Bread is my downfall in so many ways. I crave it and would eat almost anything wrapped up inside it… I am my father’s daughter and my brother’s sister in this regard.

Not a natural baker, my style tending toward the casual and approximate and not the precise nature so key in the science of baking. I do a passable chapatti along with the small arsenal of cakes in my repertoire but lately I have had a yearning to spend a little more time on this calming art.

When we first had our home in France we had a breadmaking machine – it proved itself adequate for knocking out a few basic loaves but was a little more trouble than it’s worth. I believe they have ‘come on’ now but there is no substitute for getting your hands in there so back to that tale, Rocket and I took ourselves to ‘Bread Ahead’ https://www.breadahead.com/ a baking establishment and school at London’s Borough

Such has been the love of bread in my life that in my slightly turbulant twenties, my friend The Marmoset, in an attempt to keep me up, out and still dancing at 5am, regularly accosted early hours bakeries and vans in order to get the ‘heel’ of the loaf for me. ((Heel being an Irishism from Marmoset’s mum…in our family we know it as the Knobby. (I’ve not written that word before and now I’m wondering if it’s Nobby, as in Stiles, the footballer… but no, that would be a mystifying link, although nothing would suprise me in our family. I think it’s as in Knob.)Good Grief, glad I got that off my chest)). Back to the tale…

Greeted by Manuel, a diminutive and charming French baker who told us a little of his cheffing and baking history before we launched into our first task, a potato bread. The class was made up of 8 people, and we worked around a large central bench with Manuel passing around us offering tips and encouragement in his incredibly p

The dough, Manuel explained, should be kneaded with the addition of no further flour as this would alter it in nature and produce an inferior loaf. The recipe from Bread Ahead at the end of the post calls for mashed potato but in fact we used the pieces of cooked potato you see in the picture, just squidging them between our fingers as we worked.  We also put pieces of potato on top which ast home, I won’t repeat as they fall off! The science bit, with which I grapple, meant that this very sticky dough was hard to work with and while resolutely concentrating on my endeavors and not looking up to view all those competent folks around me (just like school) I was increasingly caked in the sticky lava before me. Manuel told the group that our dough scrapers were our best friend and it is mastering the use of the scraper that would ensure the dough eventually formed a beautiful and well kneaded ball…

I battled away and when glancing up noticed that all, including Rocket, were working away at the glue like substance that stuck firmly to our bench.

In the way that magic happens (it’s always magic to me and not science) my sticky mess slowly became a soft, smooth loaf that was able to go for it’s first proving. Success at last!

We went on to make a batch of welsh cakes and English muffins before baking our potato bread inside a heavy casserole pan in the oven – this to confine the loaf and recreate a baker’s oven that we were told would secure the crustiest of loaves, and so it was.

Like our 6 year old selves, we excitedly looked for ‘our’ loaf as they emerged from the ovens and I observed the beaming faces of my fellow students, before we tucked in to Manuel’s delicious bake

which we slathered in copious volumes of salted butter.

It was a lovely way to spend a morning and we will use these recipes at home as well as spending a little more time on the art of bread in future. The class was £90 with all ingredients provided and bags with which to convey your treasures home.

The recipes are sent through by email after the class and I’ve added them below.

We used our quarry in a few wonderful breakfast items, a favourite of mine being the smashed avocado, that we effectively make a zingy guacamole with, pile atop a slice of

the toasted potato bread and add a poached egg, and sprinkled with a seed mix and some more fresh chilli – quite the best breakfast, I feel.

Rocket stuffed the muffins with sausage and cheese….and they were delicious. 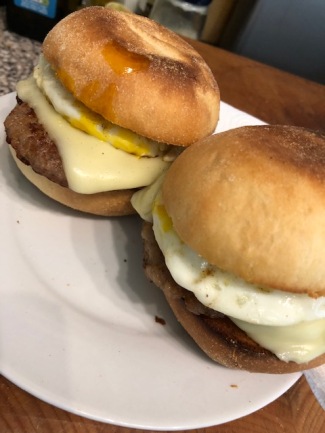 Recipes for the bread, cakes and muffins can be found below.

Put the flour, salt and butter into a large bowl and rub together, using your fingertips, until the mixture looks like breadcrumbs.

Add the mixed spice, allspice, sultanas and sugars and mix together well. Then add the honey, followed by the beaten egg.

Mix until all is combined, then bring together to form a dough (it will be a little sticky). Wrap in clingfilm and put in the fridge to rest for 1 hour.

Heat a large (26cm) heavy based non stick frying pan on a medium heat and put half the welsh cakes into the pan, making sure you don’t overcrowd them. Don’t be tempted to add any oil or butter it only needs dry heat.

Turn the heat down to low and cook the cakes for about 3 to 4 minutes on each side, until dark golden brown. Then cook the second batch the same way.

Pour the milk into a jug and whisk in the yeast until dissolved. Whisk in the sugar and leave to stand for 10 minutes.

Put the flour, salt and butter into a large bowl and rub together with your fingertips until you have fine breadcrumbs. Stir in the milk mixture until combined, then transfer to a lightly floured work surface.

Knead briefly until a smooth dough is formed. This should only take 3 minutes, as you don’t want to overwork the dough.

Put the dough back into the bowl, cover, and leave somewhere warmish to prove for 30 minutes.

On a lightly floured surface, roll out the dough to 2cm thick. Then using a 7cm round pastry cutter, cut out 6 – 8 rounds.

Place them on the tray, cover and leave for about 45 minutes to an hour, until doubled in size. If you have some rings 7cm across and 6cm high, just butter the inside and dust with semolina, pop them on the baking tray and leave to prove in the rings.

Bake the muffins for 5 minutes, then turn them over and bake for a further five minutes, until lightly golden brown.

Place the flour, mashed potato and salt in a large bowl, and combine with one hand just enough to let them get to know each other, then make a well in the centre. Put the yeast into another bowl with the water, mix until dissolved then pour the liquid into the well in the flour mixture

With one hand shaped like a fork, gently bring together until just combined. Scrape the dough off your hand into the dough and place on a work surface, making sure you scrape all the dough out with a scraper to leave a clean bowl. Keep the bowl to one side, as you will need it later.

Now with your dough on the work surface mix together for about 6 minutes, making sure you scrape your dough to the centre throughout the mixing to make sure it develops evenly. It will still be sticky and wet after 6 minutes, but round it up into a ball, sprinkle with some flour and cover with a tea towel. Leave it to rest for 10 minutes. Meanwhile, line a proving basket with a tea towel and sprinkle it heavily with a mixture of flour and semolina.

Uncover the dough and reshape it into a ball. Pop it into the basket, seam side up, and sprinkle with more flour and semolina. Cover with a tea towel and leave to prove in the basket for about 4 -6 hours.

Preheat the oven to 240°c/fan 220°c/gas 9 and put in a baking stone or upturned baking tray to heat up – in the lesson we used a heavy duty, lidded, casserole dish referred to as a ‘Dutch Oven’ with good results.

Get your water spray ready.

Very gently turn your dough straight on to the baking stone or tray in the oven, or put it on to a baker’s peel or a wooden board and slide it on to the stone or tray. With your water spray on finemist, spray lightly inside the oven and bake for 35 – 40 minutes, until crispy dark.

Once baked, place on a rack to cool