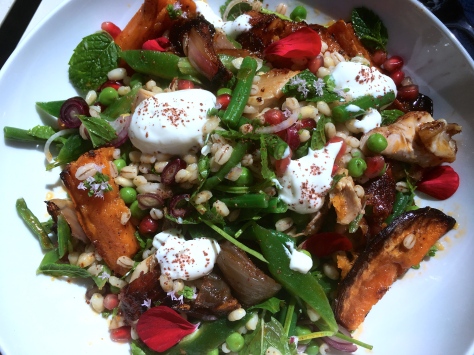 Early this week, in need of sustenance but not abstinence I considered my options. I’m home alone, save for the pooch who struts in and out of the doors that are thrown wide open in the heat…she is torturing the neighbours again and I am losing patience. It’s that time of year when my love’s work overwhelms our life in that he is indefinitely absent. What I really needed was some supper plus some lunch to take to work the next day and with any luck the day after…maxi impact with mini effort…just for me and me alone. 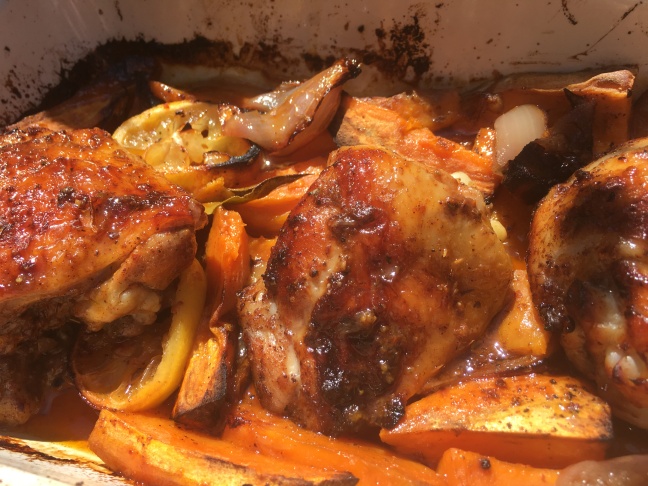 I set out to have some sort of very tasty chicken by means of the thighs I have set aside, (don’t stop here if you are veggie for there is an appropriate substitute coming up) and some sort of vegetable or salad. Ottolenghi I am not but ultimately the dish ended as one big combination with the chicken torn and combined with the greens, to wit I tucked in and I can report that there would be only one day’s worth of ensuing lunches.

A chicken thigh is a wonderful thang, moist inside with a skin that will always crisp. These are not days in which I shall cast off the skin, something I will regret when next languishing beside a swimming pool but this dish would have all the unctuous flavor offered by the skin and it will give up it’s treasure to the dressing.

I would have protein from the chicken, many leaves in the form of nutrient packed fresh mint from our garden and handfuls of coriander, I

would have legumes in the form of beans and peas, grains…barley, my very favourite, precooked and forked through with a little olive oil. Aliums, a must, for where would I be without them so some chopped purple salad onion and a little garlic in the dairy creaminess of the yoghurt, while also adding some burnt onions cooked in with the chicken. Lemons a plenty go in with the chicken both preserved and freshly roasted ones as well as a squeeze in the dressing and over the barley. Starch from some sweet potato also roasted in with the chicken…. 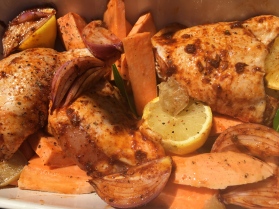 Sweet and sour notes run throughout so the bitter sweet hit of pomegranate seeds and a dash of pomegranate molasses in the dressing would add another note.

If I weren’t including chicken, and I have frequently avoided a meaty element in salads like this, I would treat slices of Halloumi cheese to the same fate as the chicken I describe below and in place of roasting would simply pan fry until they form a delicious crust before scattering them over the salad.

The hazlenuts I toasted for garnish rested forgotten in their little dish…as ever…but I did scatter the geranium petals and marjoram flowers for a fragrant note I crave, so all is not lost. I’ll just eat the nuts later, note to self.

Depth and earthiness would come from the dusky warmth of the chicken spinkled in ras al hanout and richly rose harissa. Once

cooked, I would turn overything over in a dish to macerate in the chicken juice dressing then I would turn it out with a drizzle of yogurt and a final sour dusting of the sumac that sends me hurtling back to Marrakesh.

This isn’t a recipe, in case that much is not clear… but rather the contents of my mind tipped onto a plate and doused in the flavours of my heart.

One thought on “All for one”