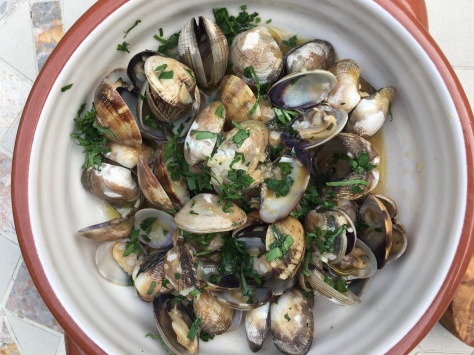 I’ve been having an extremely odd time lately, and last week I was unwell again (not seriously so) but last weekend I was in great need of cheering up. Usually comfort food for me might be of the stodgier variety but it was hot…man it was hot and I yearned for a Mediterranean beach, with seafood. Being at home and watching re-runs of Rick Stein on a loop had not helped this longing and let’s just say, I won’t be jetting off anytime soon so… it was one of those times when The Med needed to come to South London.

Rocket, pottered off, list in hand to our fab seafood stall in Pimlico, we had an abstract chat about clams, prawns and squid, then rattled around in the fridge to locate some suitable veg and jars of this and that. So, small plates it would be. My hopes of recreating sweltering afternoons under a cerulean sky, deep rose oleander bushes on one side, crystal lapping waters on the other, somewhere like Coullioure or maybe Cassis…. back to the tale.

We kept the clams simple, plenty of chopped garlic into some olive oil, clams in and dash of white wine.  A sprinkle of parsley and bob was very much our uncle. These small 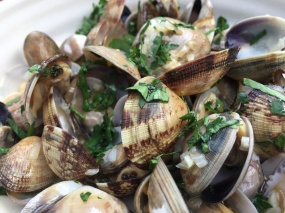 clams are such sweet little nuggets.

The prawns were dropped into a marinade of harissa, some chopped preserved lemon and a dash of oil with a little salt. After an hour or so we flashed them into a frying pan.

For the squid, duly cleaned and slice through, just a dousing in seasoned flour, then into a batter of 2/3 cornflour 1/3 plain flour, a little pimento, salt, pepper and chilled sparkling water. Dropped in to some hot olive oil and fried until just lightly golden they were crisp and tender. 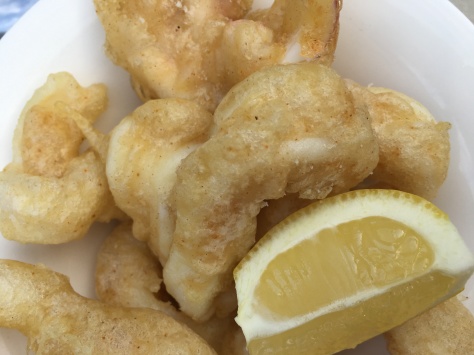 With some suitable veg, a few anchovies and baked bread smothered in garlic and freshly grated tomato supper our was served. As we grazed, bathed in a warmth, no breath of air… those memories of Mediterranean afternoons, drenched in sunshine, were right back with us.