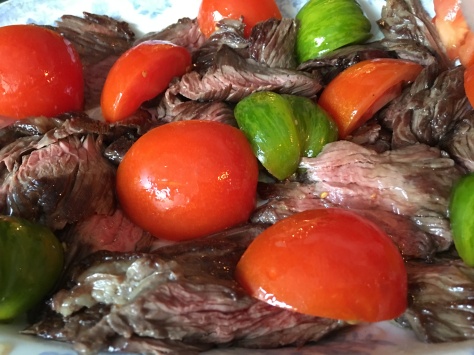 Postcards from the Pyrenees, encore.

Driving up the winding lane, alongside the fields that will soon burst with maize and sunflowers, I’m struck by the variety of livestock in our small village. A gathering of 250 inhabitants and a myriad of small farms, in every other home the obligatory well-tended kitchen garden. There are cows, sheep, ducks, pigs, chickens, guinea fowl, geese (of course, we are in Gascony after all) and goats – well they are the ones I have seen anyway, there may well be others!

In summer, a slightly wacky

neighbour of ours leaves sack loads of the most delicious tomatoes on our doorstep, they are heavy and fleshy – the best we have tasted. Peach trees on his pretty plot will yield us juicy treasures, and our own very sparse herb patch (the peril of not living there full time) will give up it’s fragrant gifts. I covet my neighbour’s peach tree, there is possibly a law written somewhere that says you aren’t allowed to do that.

Our neighbours love to share the fruits of their labour, so we think hard about a ‘British’ gem to offer them…often a few ales or some good cheddar cheese… we will try much harder now that they peer at us in incomprehension due to ‘our’ desire to ‘exit’ the beautiful continent. Not our desire at all….imposed by others, I shudder.

I pass the typical farmhouses with their timbered frames protruding the masonry and can picture the time when the original D’Artagnan (Charles de Batz Castelmore) rode the Gascon hills of his birth. I wandered about the field on our return from market, collecting a few wild flowers for the house. The savanna we so studiously neglect really does us proud in Spring time, brimming with colour to create the meadow we gaze out on. For the rest of the year, it’s either a jungle or sort of weedy scrubland that we have never managed to tame.

The wisteria just now popping out into flower, gave a scented note to my jam jar of colour, offering a cheery nosegay to grace the kitchen table.

I don’t eat lots of meat, particularly not beef which I enjoy rarely (and rare only) in pretty small quantities. Taste is such a strange sense, why is it that things that taste so good to me, may not to the next person?

We had this bavette of beef; I like this meat for it’s loose texture, and excellent flavour. It’s the flank and benefits from quick cooking over high heat before a good rest. The revelation of Tuscan fries to go with this has still not left me, they are crispy, flavourful and I will definitely be making those again…

ith flavour. I had thought, rather naively, that Nigella had conjured up the idea for Tuscan fries herself but I now know that they are a ‘thang’ invented by your genuine Italian chef, Cesare Casella.

From our local pasture we had very good beef, from the market we had fine tomatoes and potatoes, and from our Italian neighbours a recipe with which to showcase this wonderful produce.

First we cut the potatoes into chunky chips and dried them well with a tea towel, before placing them in a pan of cold (yes I said cold) olive oil, which we then put over a high heat to come up to a boil.

Next we put the griddle on to heat up and made the steak dressing by adding a pinch of chilli flakes, some dried oregano, a dash of red wine vinegar, sea salt and ground black pepper to a wide dish of olive oil.

Meanwhile the oil with the fries in was bubbling furiously, we turned the heat down a bit to keep the oil on a rolling boil and cooked the chips for about 12/15 minutes –

when they were a lovely pale brown and starting to crisp we added in a head garlic cloves separated from the bulb but in their skins, we stirred those gently through the fries.

We seasoned the steak and seared it on the hot griddle for about 2 minutes each side before removing it from the heat and sitting it to rest in it’s ready bath of oil and vinegar.

This is to our taste,  if you prefer it

less rare, I’d probably use a different cut of meat.

Finally, we added the herbs to the bubbling fries and stirred them in the oil to release their perfumed oils, for a minute or so. Then we removed the whole contents of the pan from the oil and popped them on to kitchen paper to drain.

We lifted the steak from the dressing and put it onto a board for slicing before returning it to the dressing. Meanwhile we scrunched quartered tomatoes into the dressing for even more flavour. Then we ate the lot…and I mean the lot, we mopped the last of the dressing with chunks of country bread, before dreams of Musketeers carried us back to ancient Gascony. 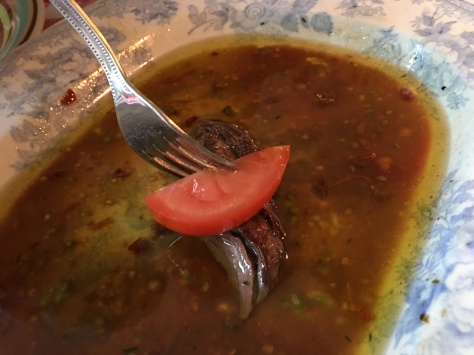 3 thoughts on “Meadows and Pastures”