Orginally, the idea was to have masala omelettes for our weekend breakfast last week, those delicious spicy, thin ones, of which we both have such fond memories. Us being us, it didn’t stay like that and soon we had remembered the crab claw languishing in the fridge, surely that would have to go into the mix?

Another cup of tea later and we had arrived at a masala crab hash…using some lovely heritage potatoes (Duke of York variety) that a friend grew in her garden. The flavour of Goa with lovely British crab and potatoes.

There are times when these ideas don’t work well, or are a little disappointing but this was not one of those occasions, I’m happy to report… we were very pleased with ourselves and so were our tummies.

Up  until this point, the nicest and best version of a masala omelette I’d had was when I was in Ranthambore, in Rajasthan at a lodge with my friend, The Marmoset ….we ended up stranded on the flat roof in the middle of the night, drinking beer and sitting in wicker thrones, it was pretty strange …back to the tale.

You could say this was an

omelette, or a hash or indeed a frittata but I think it was more hash than anything else, so there you have it. I haven’t really mentioned that there were 3 prawns in it, which is worthy of note because it seems like a strange number of prawns to put in. I can only say that they were in our fridge, there were four when we started but Rocket ate one while we debated their inclusion. You may think it odd that we keep 3 stray prawns, but you would have to climb in to Rocket’s mind to unpack that one and in any case, in they went.

This works well as a veggie dish by simply leaving out the crab (and the 3 prawns!) in that case I may add a handful of frozen peas or broad beans. 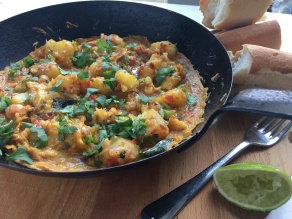 1 large or 2 smaller crab claws, picked or around a cup of picked white crab meat

4 curry leaves – if you can get them.

A few knobs of butter.

1 ½ cups of floury potatoes, peeled, roughly chopped and cooked in salted water until just cooked, then drained and ‘roughed up’ before setting aside.

2 small green chilli’s finely chopped  seeds in or out (depending on how hot you like it).

A handful of coriander root or stalk finely chopped. 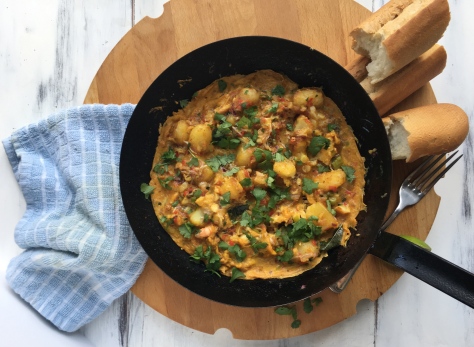