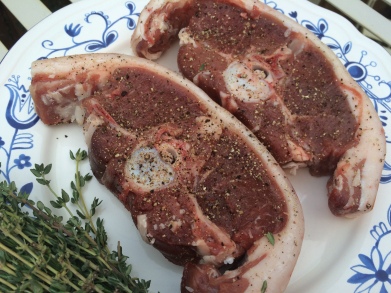 I realise that my seafood blog has taken a meaty turn of late and I shall return to fishy things soon but for some reason the onset of autumn has brought out our inner carnivore! I think it’s the realisation that we are about to embark on a health regime that will prohibit such things from our diet…

So, we bought some lamb for dinner which reminded me of a time when….Way, way back in our  early days, before we bought the shack in France, we were returning from a holiday down in Provence and taking a most devious route home  via Turin and various other places.

I distinctly remember the first part of our drive, because (and Rocket will never concede this but I swear it to be true) we got lost. We had crossed the French/ Italian border and were , I’ve consulted a map for this part, somewhere in Liguria. We were driving around deserted roads, high atop the mountains in a landscape made up of endless olive groves. In our haste on leaving the rented home we had packed away the CD’s (that’s how long ago) burying them into a bag in the boot, leaving only one album in the player which continued on repeat during the olive grove drive and which I cannot hear now without thinking of that journey….I’m not sure Rocket ever wants to hear it again but I think fondly of it! Listen along while you read? 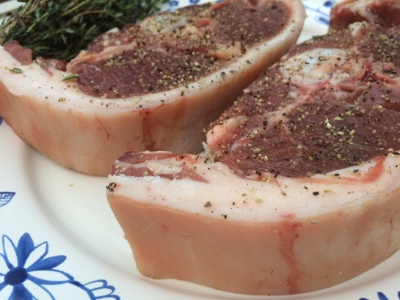 We eventually arrived in Turin and after negotiating our way through one way systems and dead end streets accompanied by some pretty hairy Italian driving we were able to leave the car behind us and get out to walk around the city.

We had discovered, on our arrival, and whilst having a cold beer in one of the lively squares ( a University City, it’s packed with students)  that the ‘Turin Shroud’ was on show and that it hadn’t been on public view in years, it was available to see until the following day and people were queuing for the rare opportunity to see it.

Over our beer we said how lucky we were to have arrived in this window of opportunity and how interesting it would be to see it and so on (I must have been drunk) and our plan was hatched to go down to take a look whilst on route to recce restaurants so that we could have a meal after. 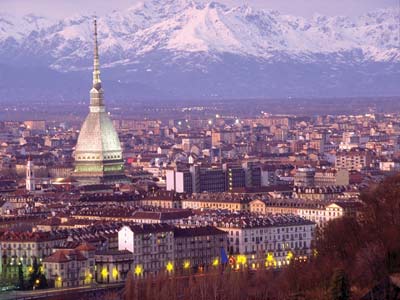 We agreed we were starving and needed to now get the shroud done (it had been reduced to a tick in the box) and get something to eat, when we stumbled across a tiny little candlelit window in which we could see lovely rustic table cloths, simple décor and a really great vibe going on. What appeared to be locals were chatting away inside with a short but delightful menu of local dishes that graced the chalkboard. So ‘The Shroud’ was relegated to a thing that would “surely go on show again at another time?” Also “hasn’t it been proven to be less than authentic?” and “we aren’t even religious, shall we just have dinner here?”.

In we went. It proved to be delightful and at one stage when trying to identify what a dish might have been on the menu the exuberant and jovial chef came over and was explaining something about lamb chops. My Italian could stand some improvement, in that it’s non-existent so in my confusion I asked if the chops were in bread crumbs, not because I desired breadcrumbs I just thought he said something about bread.  The chef immediately latched on to this saying that he could easily do that for me, it would be his pleasure …. And so he did. A more delicious lamb chop had not been consumed from that day to….

I wish I could pin point the eatery on a map or that I had taken a note of it’s name for another time, but this little place will stay in our memory boxes, unnamed but eternally associated with Turin.

Ok, so that really was a departure from the tale I was telling about our Friday night meal so back to that tale.

Friday was due to be warm and sunny and with Rocket’s imminent departure for Scotland, we wanted to make the most of what we imagine to be our last meal outdoors for this year.

We had decided to barbecue some lamb and have a little cacik and sort of ‘Tukishy’ cabbage salad with that. I realise we are mixing our Greek/Turkish metaphors here so let’s say we decided on a nod to Cyprus….it felt like ‘holiday’ food. 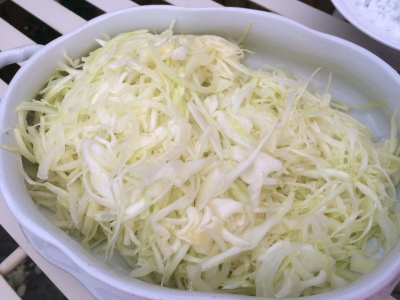 Franklin’s is a small family butcher in a back street of Vauxhall and they also take their goods to some of the small local markets in the area. Passing back through Tachbrook market in Pimlico on his way home from work, Rocket stopped off and bought 2 of the finest looking lamb chops I think I’ve ever seen. 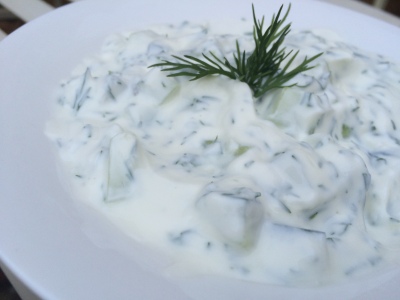 I find that with a great ingredient there is no recipe required, a little seasoning maybe, just cook and serve and this was one of those times.  The cacik was just a little Greek yoghurt with some chopped cucumber, mint, dill and some crushed garlic.

The cabbage salad which I’ve blogged before is deliciously tangy and refreshing and is just a quarter of shredded cabbage ( red or white) , a thinly sliced onion, drenched in lemon juice, a drizzle of olive oil and some good salt. It can be adjusted at times with a herb to complement the other dishes, or sometimes some red chilli flecked through, a few crushed fennel seeds perhaps. 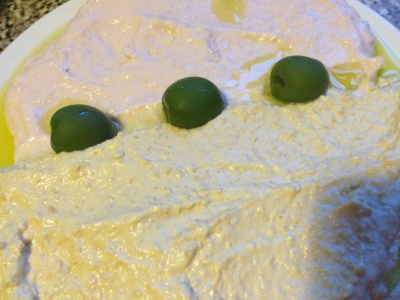 We started with some houmous and taramasalata, sat out in our tiny urban patch, a time to reflect on the summer gone. The post holiday blues of having spent all our money and now needing to go on the ‘mother’ of all diets and exercise regimes, but we are not down hearted. We know we are lucky, that has been reinforced more than ever when watching the events in Europe unfold and there are still adventures to be had, so it’s all good. 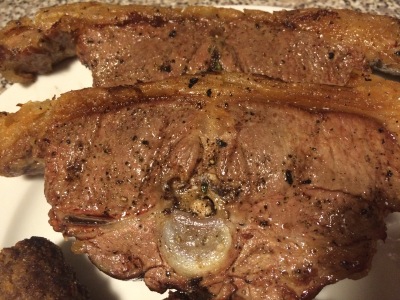 2 thoughts on “Grilled lamb chops and a tale of Turin”