Lying in bed last Saturday morning, I was contemplating the facts of my day. I had a few chores to do, but today was not meant to be entirely a day of duty. Rocket had gone off to the England v Ireland Rugby at Twickenham with my brother and so dinner duty would fall to me. I had no intention of a day spent entirely in the kitchen but I was thinking curry – and when I think that, I usually do end up in the kitchen for quite a while….

My sister-in-law, El Porcio, rang for a catch-up and after we had rambled on about our respective holidays and family thangs we ended the call and I had forgotten to tell her that the Chilli seeds she

had gifted Rocket last Christmas had blossomed, quite literally, whilst we were away. They were now smothered in flowers soon to be chilli’s and some tiny little green chilli’s had also emerged…

When trying them out for flavour, Rocket pretended to a mild level of heat so when I took my first bite of one it nearly knocked my head off, such was the intensity of these tiny pocket rockets.

I won’t take you now to the dark depths of my inner mind but this somehow sparked a memory of suppers we have enjoyed in Chinese restaurants in and around China Town, in London  and invariably such suppers involve one of those delicious spicy fragrant stews … served with a pile of some sort of interesting greens.  Returning to the UK in September has meant that I’m feeling very autumnal…… had been going to do a fish dish but such is the decision making process that a fragrant beef stew it turned out to be.

The only stumbling block was that, although I have a reasonably good palate and could imagine my way around a number of the required ingredients, I’ve never actually seen one of this things being made .  I am most definitely not an expert on Chinese cookery (or any cookery for that matter but definitely not Chinese!). 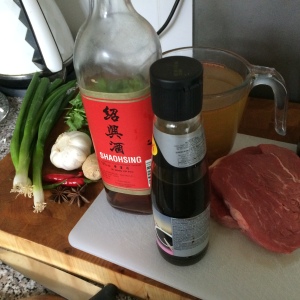 I cast around for a while on the ‘interweb’…. but didn’t really see anything that would match that which was in my head. So forgive me for the lack of authenticity, I gathered our pantry of Chinese flavourings and assembled my heart’s desire using what I would describe as a European approach to achieving the end product.

Now, I had no idea how it was going to turn out, but actually I was pleased with the end result. Rocket polished it off when he came home and we agreed it met our Saturday evening craving for spice whilst also being comforting, and different from the norm. (There are lots of ingredients but if you have the standard Chinese bits and bobs in the cupboard … we only had to buy some beef). 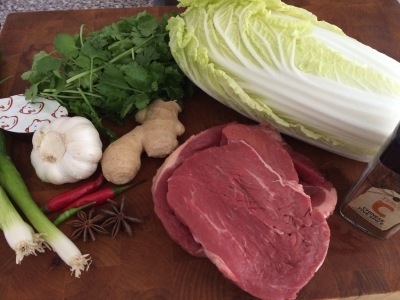 The chopping and prep took 20 minutes and the stew does need a good 3 hours to cook through making it easy to go off to do something else. I chose to catch up on my favourite blogs with GBBO on catch-up in the background, while the aroma of all things Chinese pervaded the air….We served the stew up with a pile of Chinese leaves and some plain boiled rice.

I could only get standard stewing steak but having now made it, blade of beef or beef cheek would be a much better option (as they would give a stickier and more gelatinous finish) so I’ve included that in the recipe below, cooking times will depend on the cut but long and low is the essential thang.

Here is how it came together:

2 inches of root ginger peeled and sliced into small batons

Here is how to prepare the stew: 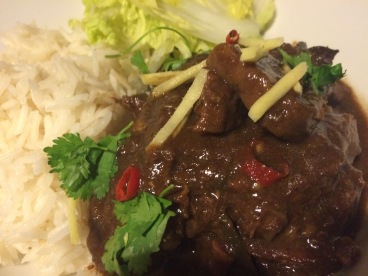