Aitch, as well as standing for our family name, is also for ‘hundred’ and this will be my hundredth post so a few weeks ago when Number One called to ask if we thought a family barbecue would be a good celebration for her birthday and also for Rocket’s, I resolved that this would be a fitting subject for my next and ‘special’ post.

Further plotting and planning took place as Number One wanted a lazy, long afternoon and evening with some good food. The second requirement of many that were to develop was breakfast ‘out’ somewhere the next day. So the plan was hatched and we embellished it as we went along, as we tend to do…

– or so we thought. Our very own Sausage, though, made other demands on the day when realising there wouldn’t be any burgers, he sulked a little and so his needs were duly met…we caved, not in total capitulation to the sulks but out of our usual need to please and feed.

Number One had also aimed to please Rocket by buying him some jellied eels – a London delicacy which look to me, very unappetizing but the flavour of eel is truly beautiful. Number One had bought some crowd pleasing oysters, she served them up with a home made shallot vinegar and shucked the lot herself, which she was very pleased about!

Fittingly, and another reason that I wanted to make this the subject of my post, the fish came from Billingsgate Fish Market (I’m a passionate supporter of them and took my City & Guilds seafood qualification at the Seafood School). Number One made the ultimate sacifice of a 5am shopping trip…. the menu, was a real team effort, Chef Skinny and Number Two (sorry shabby) taking on the canapes and dessert, myself and Rocket tackling a couple of starters and Number One, delivering some fabulous mains…and some burgers – of course. 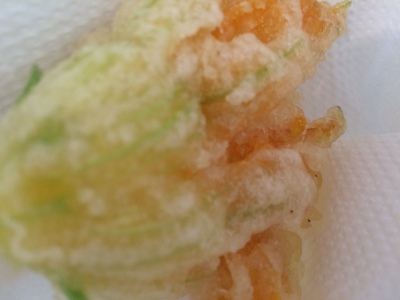 Aitch is also for hungry and our efforts on quality did not entirley win over the quantity issue and so a banquet for 8 is what we had. Potatoes took care of the barbecue and Flashdance, who had to work before joining us, brought his usual good humour. The rest of us..well we faffed around in the kitchen over a few drinks…a well practised art.

So for the menu, Chef Skinnies had prepared some wonderful scotched eggs with his coating of choice being smoked haddock and mash, real comfort food done with such aplomb that the centres of the eggs were still softly oozing aft

er being fried to a lightly golden and crsip finish. Skinnies had also done crab filo parcels, a really simple, but delicious bite with the brown as well as white meat giving them a richly delicious flavour.

Rocket had prepared some carpaccio of beef – we had been watching James Martin doing such a dish on ‘Saturday Kitchen’ a few weeks earlier and we felt this would be a chance to use some of the baby veg from our veg patch that we lightly pickled.

‘A la James’ we made a salsa verde to drizzle over the beef, crumbled over some salty pecorino and added the pickled veg having seared the beef fillet only very lightly before slicing and hammering it out with a rolling pin. We added some courgette flowers that had been fried in a tempura batter as the final flourish. 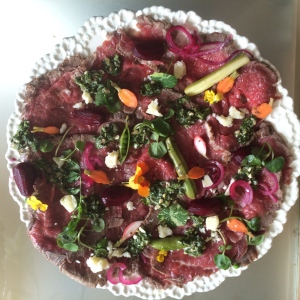 We also made some tuna taco’s following a recipe by Simon Rimmer – I’m a fan of both Simon’s food and of cured, ceviche style fish however opinion was divided regarding the lime cure… I like ‘sour’ but not everyone does! You can find the recipe here, it’s really fresh and zingy.

Number one had picked up some beautiflly fresh monkfish, which was to be seasoned up with rosemary and wrapped in proscutto, before being gently roasted on the barbie. Number One seized the opportunity to utilize Rocket’s manual dexterity and got him to do the wrap and roll….take a look here:

Some spiced chicken kebabs were added as was some slaw, loaded skins, some blue cheese sauce, and garlic mayonnaise that we forgot to serve, there is always something that stays in the fridge!

A game of cricket  (well we are English) and many, many drinks later a few of Skinnies delectable salted caramel brownies were consumed. We painted Number One’s face in blue cheese sauce and went to bed.

In a curious turn of events, I discovered over breakfast the next day that cheesy potatoes are a ‘thang’. They were hotly anticipated but being absent from the servery when first we paid a visit, we were told ’12 minutes’ wait for them which seemed to caused some consternatation. When finally said potatoes arrived, our group keenly queued for them, Number One attempted to push in front of Flashdance, who took that fairly badly and told her to step away from the spuds….they concluded in the end that this offering was not up to the usual mark and they were picked over and critiqued for some time. Spud wars, dominated breakfast – who’d have thought that after all the lovely food we’d had a bowl of cheesy potatoes would be the talk of the town…but they were!

France 2015 beckons…. what Tales from the Pyrenees?

6 thoughts on “The Aitch Team”