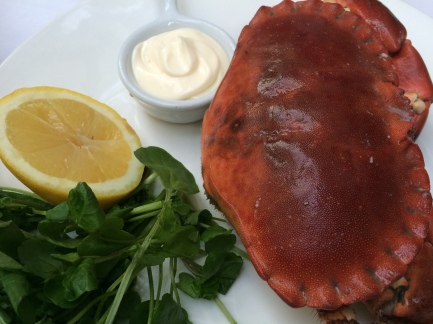 Anyone who knows me understands that I am a Chelsea girl, by which I mean I am a lifelong follower of Chelsea Football Club, along with generations of my family. It’s not a choice, I didn’t wake up one day and say I think I’ll like Chelsea…it’s something that was predetermined and “what is done, is done and cannot be undone”. It started for me with my grandad Tiddler…then going along as a tiny child with my dad or Uncle Little D and Cousin Cheesecake and then Karl-Heinz and I with Canary and Piggy – a variety of family

and friends over the years. Am I ashamed if I hear football fans being sexist and racist? Yes, without any doubt I am horrified. Do I hear much of it when I make my less frequent visits to Stamford Bridge these days….no is the answer, I really couldn’t go along if I did. I love the club, at times I see the faults in players, fans, the administration but over years, especially on a sunny Saturday afternoon there is nothing like the buzz of wandering down the Kings road, a little pit stop, some shopping and then veering off to the Fulham Road to watch a cracking game. It’s a rare pleasure these days and lately we won a little silverware but also suffered a crushing defeat – it’s a game of two halves as they say, of very mixed emotions…  Back to the tale.

It was my friend DJ Ozz’s turn to choose where would lunch a few Friday’s ago and he settled on The Bluebird, a Kings Road institution and for me, the first time back there since my brother’s marriage to The Minx…another lovely day in Chelsea. 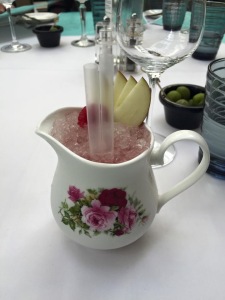 Hotfooting it across town from work, Marmoset and I missed the aperitif session in the pub (Marmoset and I now reunited in the work setting, which could be a recipe for disaster but it is in fact comforting to me to find that she is as baffled as I am by what our jobs are meant to be).

We were pleased to find a good selection of cocktails on the menu. I ordered the Chelsea flower which was a delicious gin based cocktail with pomegranite – it’s served in a little cream jug that appeals to my sense of the quirky. The dining room is vast, and on this Friday lunchtime it was pretty empty which surprised me a little bit.

In the mood for something quite light, I opted for the truffled crispy duck egg with asaparagus and then the whole crab (just coming into season) along with some fries. The pork cheek and langoustine pie was intriguing but we eventually decided against.

.. I think I must try making one of those…

We don’t look for negatives for the sake of it…but I will say this. The crab came with crackers and a picker and the claws hadn’t been cracked. Anyone who has ever tried to delicately crack the claws of a crab with those items will know the difficulty. It needs the smack of a heavy knife…not wishing to spray my friends with crab shell and not having a heavy knife I asked the waiter if the guy behind the shellfish counter (which is in the main dining room) could oblige. It seemed to cause some

consternation but back it came eventually. The crab was fresh, perfectly cooked and delicious. Eating it without the offer of a finger bowl or a receptical for the shells was another issue, and I didn’t want to cause further fuss so…these are small things but they make such a difference.

My compadres chose from a fantastic menu with broad appeal and, as I am greedy and interested in what everyone else has, I got the chance to taste. My starter of soft duck egg with generous shavings of truffle and crisp asparagus was an absolute winner and the other stand out dish for me was the beetroot cured mackerel chosen by DJ Ozz and a number of our party.

The wine lists are where, in my opinion, restaurants in London get it wrong (not all, but many, many). Over recent years the restaurant trade has picked up on the need for informal dining, set price menu’s small plates etc to make things more affordable – and yet often the cost of drinks is what drives the menu up and can make the difference between choosing to eat out or to stay in. The wines here starting, I think, at £24.50 per bottle. This isn’t unique to the Bluebird but I feel it’s a failing if you can’t offer a decent house wine for £15.

Mata Hari and I shared a bottle of the Bergerie de la Bastide Pays d’oc Rose, which was very nice though…it might have been two bottles….

Mr Vladimir Von Beaverhausen opted for the duck which was also very pretty and perfectly cooked…it came with a mountain of barley which seems to have dominated this picture!

For his starter, Mr VBH had chosen the Denham estate carpaccio of venison 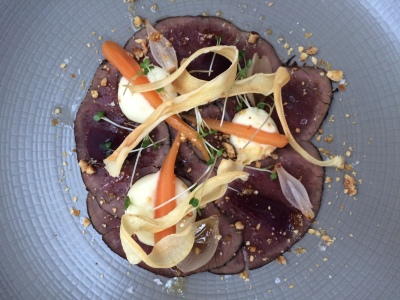 with parsips – isn’t it pretty?

The Marmoset chose the poussin and she reported that it was really good. I couldn’t report on the other food options chosen within our party as the round table meant I wasn’t close enough to get a good idea and to hear the ooh’s and ahh’s or any disappointed rumblings. 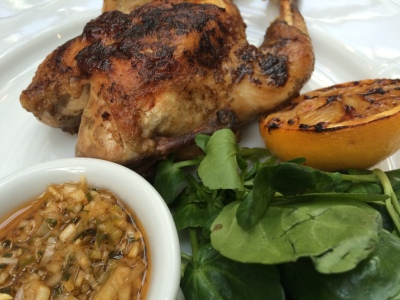 All in all, once ensconced in The Cadogan Arms ‘post match’, the feeling was that The Bluebird still delivers as an all round solid venue with a great menu.

I’d love you to comment! Here are the boys…back in the day.