I woke up suspecting that it had rained and would continue to do so, I rolled over and put the quilt over my head. The clouds had been gathering the night before and although the weather forecasts (literally none of them) have been accurate lately, this had been forecast.

I also felt a need for some seafood, we eat more meat and veg when here as we look for what is good and local in our land locked region, but we do get great seafood as the Pyrenees is flanked by the Mediterranean on one side and the Atlantic on the other.

I was dreaming of the rich intensity that comes from a seafood stew whilst also knowing that a rainy day needs to be filled with the chores I need to achieve and that I should devote my time there.

We are in southern France, practically on the border with Spain, and within striking distance of Italy. I thought about that and dreamed up a concoction that takes a nod from the Provencal, from across France and dipping a toe into the other areas.

I cannot claim to have invented this as it is a mix of so many recipes that have gone before it but here is what we did to create the dish we wanted.

(I must credit Rick Stein for the blistered red pepper in the chopped tomatoes which is from a recipe he does with Sea Bream and which we have made dozens of times).

In a strange twist we went out to pick up the fish and could not get Langoustine for love nor money ( I know they were in short supply in the UK in recent times so it’s probably a good thing not to have accessed them). Anyway, we bought what was available, which is I think the beauty of these types of stews.

This will feed a greedy 3 to a ‘normal’ 4 – whatever normal is these days, the shellfish and fish can be varied according to your taste but you will need some prawn shells for the stock.

A litre of water

All the prawn heads and peelings.

The bones, head and trimmings from the sea bream.

1 medium Sea Bream filleted then take the fillets and cut them in half again at a jaunty angle.

1 cup of cockles, live and rinsed

2 cups of Mussels – live, and cleaned.

About 12 large Prawns, peeled and de-vained.

Large Prawns whole for garnish ( we peeled the bodies and left on heads and tails  just makes easier eating).

A few baby squid, cleaned and sliced. If you have only larger squid just ensure they go into the pot a bit earlier – squid cooked very slowly can be delicious.

Clams, a handful – of your choosing, we used Amandes (I prefer Tellines the little cherry stone ones, but such is life).

8 large vine tomatoes, peeled (by plunging into boiling water) and roughly chopped. You can used canned chopped tomatoes for speed if you like, I’d probably use to 400g cans.

3 to four potatoes, peeled and cut into chunks

A large measure of Pastis

2 cloves garlic, finely chopped – or more to your taste.

A cup of fresh samphire for an irony hit of green.

About 2 tsp. sea salt – adjust to taste as depends on natural salinity of the seafood.

A pinch of freshly chopped Parsley to garnish.

Gently fry the onion, a diced carrot and a stick of diced celery if you have it – also add the fennel bulb trimmings.

When softened, flame with some white wine and allow this to bubble away.

Add the Fish bones, Prawn peelings and heads to the saucepan. Along with a bay leaf and the litre of water.

Allow this to simmer for about 30 minutes, and then pass through a sieve.

Return the strained liquor to the pan and allow to reduce to about a cupful.

Flame a red pepper of the gas rings until the skin has blackened. Wrap it in a plastic bag or cling film and set aside until it has cooled when you can scrape away the skin. 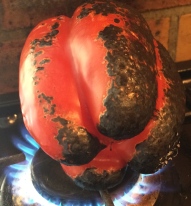 Deseed and roughly chop the pepper flesh and set aside again.

In another large pan, fry the onion, garlic and fennel over a medium heat in the olive oil – until it has softened and started to go lightly golden.
Add the pastis to the pan and allow it to bubble away to nothing…

Next add the white wine and allow the liquid to reduce by half.

Add the cayenne pepper and tomatoes along with the chopped pepper, a bay leaf, a couple of springs of dried thyme and a teaspoon of salt.

Finally add the saffron strands – no need to soak, and 10 grinds of black pepper.

Add the strained stock to the tomato mixture.

Set the pan to the lowest possible heat, cover and leave to meld together for about 3 hours.

Check the mixture from time to time to ensure it is not sticking, you can give it a bit of stir.

This is a rustic affair so the consistency of the final stew sauce is up to you. I like mine to have texture but not lumps of tomato, so I take a stick blender and give it the lightest ‘whizz’ at this stage. This, I feel has the effect of further combining all the flavours and also giving it a bit more body – I have no doubt that if left for several hours more this process would occur by itself! Once happy with the consistency, add the potatoes and let them cook for about 15 minutes unit they are becoming tender.

Next add the baby squid to the pan, along with the mussels and clams – increased the heat slightly so that you ensure the seafood is steaming.

Add the cockles to a separate pan with a splash of water and bubble them with the lid on until they spring open – less than a minute. They can be gritty which is why I like to do them separately but at this stage, lift them out of the liquor, shells and all and pop them into the pot with the other items.

Whilst the mussels and clams are cooking, lightly score the skin of the beam pieces brush with a little olive oil and season with salt and pepper.

Place them skin side down in a hot frying pan, allow them to cook for about 2 minutes, until the edges of the fish are no longer translucent but the middle still is, turn the heat off, carefully turn the fillets over and allow them to finish in the residual heat.

After 3 to 4 minutes, when the mussels and clams have opened, add the samphire, check the stew for final seasoning – this is where invariably I will add the remaining black pepper, then serve into your bowls and serving dish, carefully placing the bream prices on top – ensure some of the whole prawns are at the surface as the look pretty.

Sprinkle with parsley and serve with some fresh crusty bread.