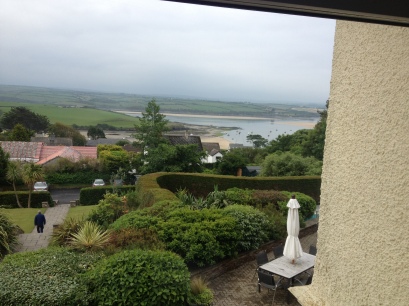 When I met up with my friend Marmoset the other day, she reminded me that it has been a year since she left Robben Island (our former place of employment). Meaning that is has been over a year ago since we took ourselves on a girls weekend to celebrate her escape. We visited The St Enodoc Hotel for dinner at ‘Nathan Outlaw’. A reminder of the year gone past spurred me to write about it before the memory fades too much further, because it is very worthy of a post.

The hotel is in Rock, Cornwall and we elected to fly there, it was a short visit and flying was an economical option for us by comparison to driving or the train. When we arrived we were made welcomed by the team and we had supper in the brasserie that evening.

It was really good, we enjoyed the lively ambience, and the beautiful aspect of the brasserie which has glass walls looking on to the terrace. If we had only eaten there, without the next night’s meal in the fine dining restaurant we would not have been disappointed, we were happy with the food and the value.

We’re not exactly intrepid, Marmoset and I, but we do like a bit of an adventure, a mooch, if you will, and a pit stop of course. We wanted to walk off some of the excesses from the previous night so we came up with a route that would take us along the beach to the St Enodoc Church – I had read that the church was virtually lost in the dunes until the 19th Century. After this the dunes around the church were stabilised to protect it for future generations.

Away we went, the usual walking up and down trapped in dunes, lack of a proper map (or any map at all) and a degree of arm flapping before we emerged onto the golf course. We could see the town beyond and were baffled for quite a while staring out into the distance looking for a spire or some clue to a church.

Suddenly, Marmoset looked to her right, smiled and said – “do you think that’s it?” We were standing just a short distance from the church which is slap bang in the middle of the golf course. It is charming, when standing in the churchyard you can see the sea beyond… John Betjeman’s grave is there, its a beautiful spot and very fitting as a resting place for a poet. 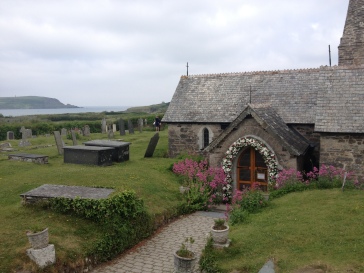 Continuing our walk we loped down to the Daymer beach and spent the afternoon walking back, stopping only briefly for a beer in Rock – we would be enjoying the tasting menu later and wanted to do it justice.

This comes from ‘Seaside Golf’ by Sir John Betjeman who was made an honorary member of the St Enodoc golf club, he paints a more poetic picture of the locale than I ever could:

Sitting out on the terrace before dinner, the staff came to see us to check we were happy with the menu – I am allergic to oysters (much to my chagrin) and Marmoset had let them know in advance.

I felt like a nightmare guest at this point because although there are very few foods that I don’t eat, I’m really not a fussy eater at all, ice cream is something I don’t like. The team had kindly switched the dessert for me as well, with impeccable grace.

I have to say at this point, I would have just eaten around the ice cream – I have even made ice cream to serve to others such is my belief that it’s a nice thing.  I’m angry with myself that I’m unable to palette something that clearly is so delicious to others but the staff had already changed my menu so it would have been rude to insist on the ice cream in order to ostentatiously reject it.

If I were ever to go on the show ‘Saturday Kitchen’ and James Martin asked me for my food heaven and food hell (as if that is ever going to happen, but I can imagine it anyway) my food heavens would be numerous but would end up being crab – my food hell would be ice cream. I follow a blog called Ice Cream Magazine, and I delight in the recipes on there – this just goes to show what a puzzle I am.

Chatting to my cousin Dewey on Saturday, he suggested that guilty pleasures would be a good post in that we are all getting quite stuck up about food, which is true, but that we donut admit the strange snacks we enjoy in private.  We discussed the fact that we sometimes eat bizarre and basic things that appeal to us like….

I’m not gonna say as I think I will post it soon!

Back to the tale.

So we’re out on the terrace and we were asked what wines we might like with our meal, we opted for the wine flight, which matched the wines to the tasting menu through the meal. This was a very special occasion and so we threw caution to the wind, however the throwing of caution to various winds has happened with uncommon frequency where Marmoset and I are concerned, this has led to 1) Having no money left 2) ending up on a roof in India having a G&T next to the air conditioning system 3) Driving out to have ‘a bite to eat’ during a hurricane in France 4) Thinking we’d been to Milton Keynes when we absolutely had not, I could go on….

Excited now, with that lovely buzz of anticipation of a great time to come, we enjoyed our pre-dinner Proscecco, there were some nibbles on our table – a seagull took them. I’m leaving it there…

I’m really afraid of gulls. Just glad it didn’t take my eyes. I know some facts about deaths caused by seagulls but I’m banned from speaking the truth because my friends, frankly, disbelieve said facts (but they are both true and shocking (the seagull facts not the friends, well maybe…?)).

Once seated in the tiny, cosy and intimate dining room – the sort that is like eating in someones living room – in a really good way, the charming sommelier took us through the wine choices. I wish I could remember his name, he was South African (I should write reviews when I’ve just visited)  he took us through the wines in a really interesting but unstuffy way, we tried some wines that we would never had chosen ourselves, and that is the advantage and fun of both a tasting menu and a wine pairing, I find.

We got underway with the first course which was the squid with peas and paprika. It was a great start, packed with flavour, in a way you can’t even imagine. Needless to say the rest of the meal was simply stunning.  So great was it, that Marmoset who never eats squid, can’t stand the stuff, gave the squid with peas a go and enjoyed it, if you don’t mind- I am in awe of Nathan.

I enjoyed all courses, if I had to choose a favourite it may have been the grey mullet, but it might have been the squid, but it could have been the Turbot. It’s a tough choice. We were given a signed copy of our menu, and we departed the following day, longing to return, thanks to Nathan and his delightful team.

“Phone for the fish knives, Norman

As cook is a little unnerved;

You kiddies have crumpled the serviettes

And I must have things daintily served.”