I’ve been to the Harwood many times and based on previous experiences, we looked forward to Saturday’s lunch with great anticipation. Mike Robinson the chef who also owns the Pot Kiln Pub in Berkshire is one of the owners. The pub is located in Fulham, I used to work just around the corner, which was highly dangerous but now, I go there much more rarely.

I think I’m right in saying it was the first pub in the UK to receive a Michelin star, that was a good few years ago and many others now have the coveted award. Rocket and I met family there for a spot of lunch. When we arrived, they had got going with some of the delicious venison scotch eggs, soft of centre and crisp outside, some English bubbly was a great accompaniment.

The interior is pub meets rustic restaurant, chunky wooden tables of all shapes and sizes adorn the bar,  it has a traditional subtle feel with friendly bar staff who are very accommodating -especially as we had our dog with us.

They brought us some home made soda bred still warm from the oven, we devoured it in about 30 seconds. To start, I chose the pigeon faggots and they were really good – it’s not something I’d usually order but I’m trying to vary things a bit and also we had decided on a bit of a fish fest for the main.

Rocket went for the pig jowl with black pudding – he really enjoyed it, and I accept neither the pigeon or the jowl would be for everyone, there were some less challenging openers as well.

The Harwood majors on game although there is also a very healthy fish offering that varies with the seasons. They have at times been very accommodating of our veggie mates but the menu is not heavy on veggie options. They do what they do well, it isn’t a veggie haven and that’s that.

For mains we chose the whole turbot for two to share, with cockles, potato dumplings and samphire. I felt that it could have served 3 or 4 and I ate more of it than I needed to, but it was delicious and well cooked. It would have made a better value dish for 3 or 4 sharing, so shoot me – I think that’s important. The cockles were so plump and completely grit free…

There is a simplicity to fish dishes baked in this way, with few accoutrements, that I particularly appreciate. Conversely there is a complexity in the sense that it takes so much skill to deliver them flawlessly – there is nowhere to hide.

Rocket and Karl-Heinz said it was a portion for 2 so we must feel free to differ. The fish had been cooked with thyme, rosemary, garlic and lemon. We all felt the herbs were a tiny bit overwhelming to the fish, but that is probably splitting hairs.

The desserts at the Harwood are always tempting and imaginative, so we just couldn’t  resist it. There’s usually a little pot of warm donuts, the flavour of which varies with visits but this time it was raspberry and very good they were too, warm and comforting, with a side of dipping cream. 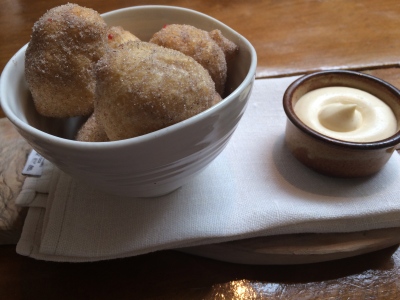 The food is wholesome and always well executed, prices are not cheap but we have rarely been disappointed on quality.

For me the Harwood is up there as one of the best dining pubs in London.

Now this was a special occasion and so the bill was split all different ways, I’m unclear as to what our share would truly have been but one thing is for certain, the setting, the staff and the food made a great backdrop for a spot of lunch with those we love.