See part one first…. Pottering around in our new home, assessing jobs to do we lost track of time but suddenly thought we had best go round to the village restaurant to make our dinner reservation. We reasoned that it probably wasn’t necessary but we hadn’t got any real cooking implements so we wanted to secure our supper and we hoped, find that the place was a little gem. Planning to see the Rugby World Cup final in the afternoon we thought that buoyed up by England’s win (yeah right- when do England ever win any major sporting championships?) we would wander around to the restaurant afterward in the hope of maybe meeting some villagers and having a convivial time. After what we thought might be the lunchtime rush we walked with great anticipation the 4 minutes down the lane.

No sign of anyone in the restaurant… we shuffled about for a bit and then as if by magic the chef appeared in the doorway. We were all ready to practice our French but before we could treat him to our carefully prepared introduction he launched into, what sounded to us like a diatribe. He was very animated; spoke at great speed and his eyes were as wide as saucers. He spoke in what we now understand to be the local very strong Gascon accent (the shack being in the historical region of Gascony – there may be talk of musketeers at a future stage).

We did not glean even a single word of what Monsieur said, not a word…. So we ploughed on with our intro and our request for a reservation as which point it became apparent there was in fact a bigger problem than the lack of comprehension. Madame Teeny Tiny was duly fetched and when that situation failed to yield a result, although the introduction of lots of smiling was very welcome, the couple produced their lovely daughter Mademoiselle Smiler…. We must have looked downcast because we thought we understood that this restaurant only opened at lunchtimes and was closed every evening. We explained our predicament and asked if they could recommend somewhere locally, anywhere within walking distance we asked hopefully? This was met with confusion….

You see we’d had a glass of wine or two to celebrate the house and had planned a few more with the match later so hadn’t wanted to drive…we now understand that walking anywhere is an anathema in our area. So no progress there, we asked where else we might go, perhaps somewhere they knew to be good in another town and we would just have to ditch the match day drinks… shrugging ensued.

Ok, so we thought we should have bought some food, the shops were now closed for several hours and if we went out after that we would miss the match. We began thanking them ready to depart when they were all speaking at once and it seemed that we had misunderstood, we could have a reservation but would have to be 9 o’clock. We were very pleased, we said walking home as we laughed at our ineptitude and the close shave of nearly missing the point about the possibility of supper.

Surprise No3: We bloody won! We only went and bloody won the world cup…Johnny Wilkinson come on down! We watched on our little TV deciphering the commentary in French. Gascony is deep in Rugby territory so we knew they’d be showing it but we had under anticipated the general verve for ‘Wilko’ – he remains loved like a god down there having spent the last few years playing for Toulon but is now just played his last game for them.

On a high, we got ourselves ready,and away we went. As we approached the dining room was in darkness, we were starting to feel hysterical anyway, tiredness a dose of stress and adrenaline had taken over but we were sure now that we had not understood and perhaps had made a reservation for another day… As we got closer we saw a light on in the kitchen and as we arrived at the door, Madame Teeny Tiny saw us, waved encouragingly and then swung open the doors to….

Surprise No 4: a completely empty restaurant. A restaurant that was definitely closed – and which we now know categorically NEVER opens in the evenings! Madame put the lights on, and showed us to a table in the middle of the room – we said no, no, please don’t worry, you are closed. Yes she said, nodding and smiling – it’s ok, we have made you some dinner! Whilst we ate in silence, with the family in the adjacent kitchen, we did experience the first of many truly epic meals at that lovely little restaurant. Packed with locals every day of the year, those from neighbouring towns, road workers and firemen, little old ladies with aubergine coloured hair.

In short, everyone who enjoys a 5 course meal featuring very seasonal, rustic, regional food cooked with love, care and expertise and which includes a set menu, wine, water and bread for some ridiculous price like 22 euros. I’m not sure if I should refer to this as surprise No5, but it was a delight and is the gift the keeps on giving. Feeling sorry for us, they had thrown open their doors and have subsequently hosted us and our many visitors (henceforth to be known collectively as ‘all and sundry”) with good grace on numerous occasions.

There is often the option to push the boat out and take the higher menu, which is usually a celebration of the house special soup (a sort of chicken broth) piles of king prawns in garlic butter, crudités or local ham, a roast meat or large steak, the most delicious chips cooked in duck fat, a dressed salad and then a dessert. This causes some staggering under the weight of our bellies on the way back home…In the interest of absolute honesty, I should say that the set menu involves very little option on choice, and on occasion we haven’t really been able to discern some of the items – but we have ploughed on regardless and encouraged ‘all and sundry’ to do the same.

Now Karl-Heinz (my bro) is a bit of a celebrity being a veggie (well he eats fish but they still think of him as a veggie) and when we make a booking these days they always ask about ‘Le Vegetarian’ and whether or not he will be joining us. We are, it must me emphasized, in a landlocked area that ensures the traditional dishes often comprise of meat, although the produce is fabulous and vegetables are used to great effect.

We get some funny looks from the locals when we burst forth as an exuberant mob, but they know us as les Anglais and now they smile and nod a lot. More than 10 years later, it feels like going home.

What of the goats from part 1? Turns out Monsieur Woolly the former owner of our house, had taken the chance to let his goats graze a little longer on our ragged pasture, in the hope of keeping the grass down for us! 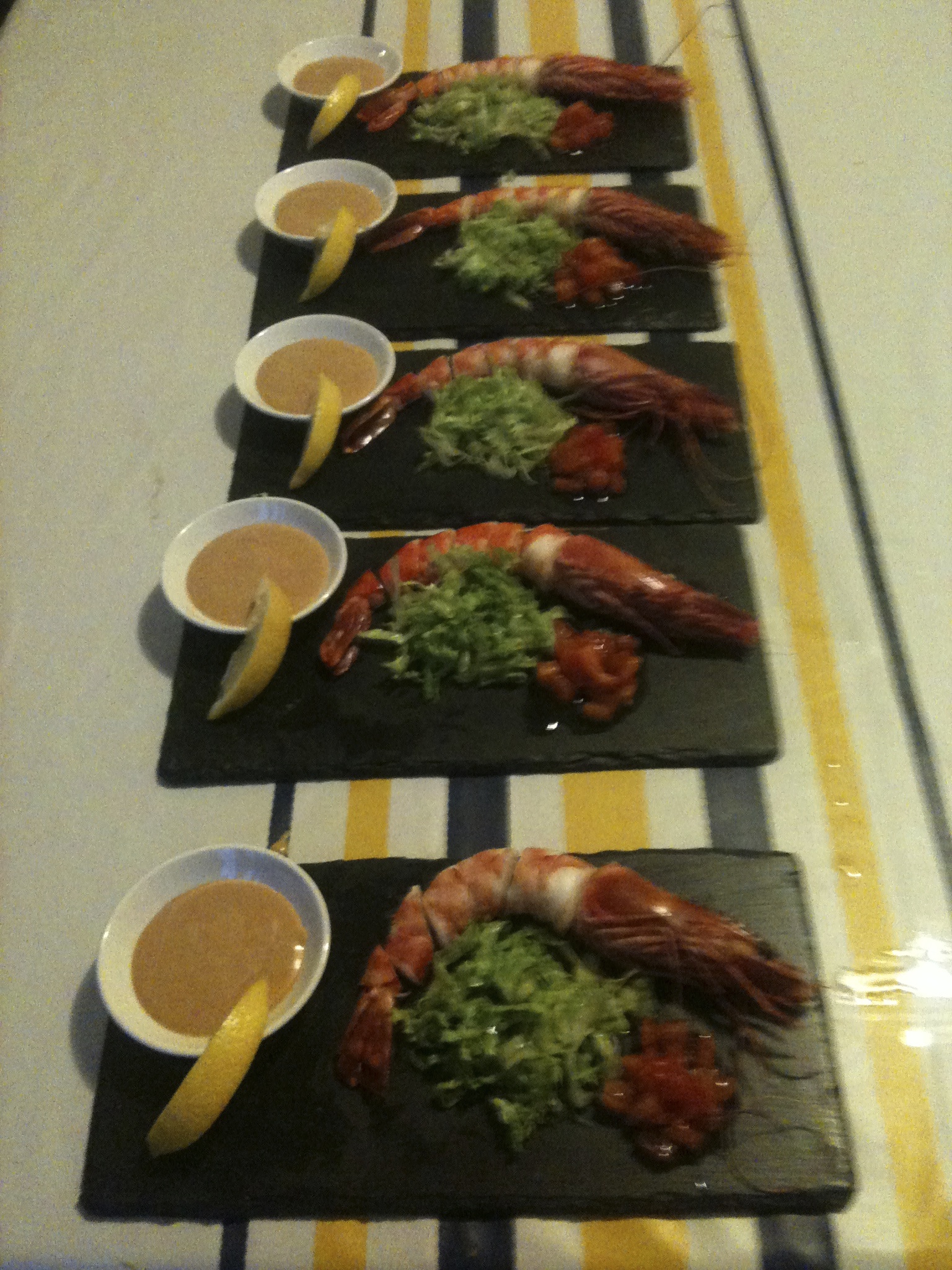